Some time ago we (the Hydrogen team) launched the first edition of the 'Hydrogen Spring Drumkit Contest'.
The goal of this contest is to encourage the Hydrogen users to contribute new drumkits.

The goal of the 'Hydrogen drumkit creator' script is to make it easier to make these drumkits.

Although creating a new multilayered drumkit isnt all that complicated it can be quite time consuming:

Setting up your mic and recording the samples will probably take up most of you time but it's rather hard to skip this stage ;-)
However, importing and organising the samples you have recorded can be really tedious and time consuming too.  Luckally this can be automated :

Inspired by a perl script written by Freqrush I started writing my own 'H2 drumkit creator'.  I did this for several reasons :

To be able to use this script you still need to record your sounds first, so step 1-3 remain the same.


Once you start to save the individual hits you do however need to make sure that you name your samples according to this naming scheme :

An example :
Say you have recorded a 'Ludwig kick' at 4 different velocity levels and you want your kick to be instrument nr 2 in the drumkit.
In this examlpe you will need to use the following names for the 4 files :

For one of your toms you might have only 2 samples, and you want the tom to be instrument 5 of the kit :

The script will ask you for some basic info about the kit :

(Note that you can still change this info once you import the kit in Hydrogen.)


If all goes well you will see this in your terminal window:


Now open hydrogen and import the kit via 'Instruments - Import library - Local file' browse to your kit directory, select your drumkit and click Install.
Your kit will now be available under User Drumkits in the Sound library


Step 3 : tweak and save
Once you have loaded the kit you will see that the Kick is on instrument position 2 and the Tom on position 5: 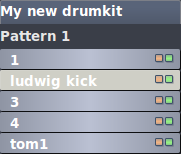 The Kick has 4 layers and the min/max velocity of these layers has automatically been set so that all layers have an equal part of the velocity range: 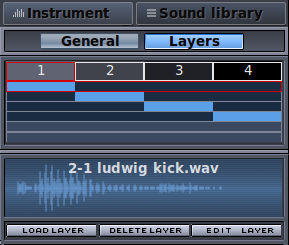 Note that these velocity settings are just a starting point for you to tweak your instrument.


Get the script:
You can download the script here
(don forget to make the script executable after download: chmod +x createH2kit.py )

Posted by Thijs Van Severen at 4:12 AM